If you don’t have time to listen, this series of three blogs will provide some of the highlights:

Dr Elaine Flores is a Research Fellow in Planetary Health, Peruvian Medical Doctor, researcher and member of the Centre for Global Mental Health.

Dr Flores began by outlining that climate related disasters are increasing in frequency, severity and duration. 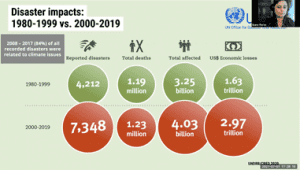 The mental health impacts of disasters are related to both primary factors (proximity to the disaster and level of impact it had on them), and secondary (indirect factors such as vulnerability).

Dr. Flores then focused on the example of the impact of El Nino on Peru.

There was a significant 2016 global El Nino event, followed in Feb to April 2018 by another event that affected Ecuador and Peru, creating a large amount of damage including landslides and flooding.

Dr. Flores’ team conducted a cross-sectional study one year after the landslides, in the outskirts of Lima, Peru. This area was badly affected, and had experienced poor living conditions even before the disaster.

The study aimed to determine the long-term prevalence of post disaster mental disorders, and links with socioeconomic determinants, and the exposure level to the disaster. See Fig 2. 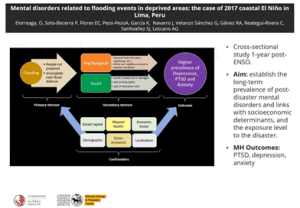 Some age groups were more likely to develop PTSD than others.

They also studied perceptions of El Nino and the support these communities received.
It was found that almost all participants were unaware of the impact of climate change on their experience.

Who we are?
What do we do?
Key people
Policies
Donate

Psychology for a Safe Climate (PSC) is not a provider of clinical mental health services. The support and advice we provide are not intended to replace clinical services from mental health professionals and is of a general nature only. PSC has developed a national network of Climate Aware Practitioners. The quality of services provided by Climate Aware Practitioners is the responsibility of each individual practitioner and is not within the control of PSC.